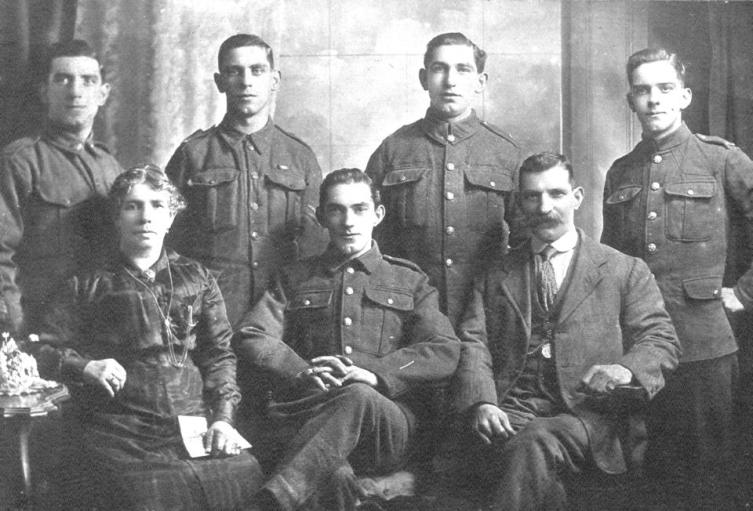 Connecting the Past to the Present

This photo was taken in 1916, when five of my great uncles came home on leave from the Western Front.

Tom, on the left had emigrated to Australia in 1910 but accidentally bumped into two of his brothers when they were all fighting in France. They wangled some leave home to Liverpool, at the same time as their two other brothers and this photo was taken, together with my great grandparents, to commemorate the reunion. There are six other siblings, including my paternal grandfather, who were not in the photo, but even so, the family resemblances are there.

“I’m from a long line of survivors”

When this photo appeared in the Liverpool Echo last week, my cousin posted it on Facebook another, virtual, family reunion took place as my cousins and I tried to piece together half-remembered stories and legends about our family, together with a family tree I’d never seen before. A reunion from nearly 100 years ago brought about another one in the present day and demonstrated the power of the past to connect us with each other and our ancestors. The picture made it all real, especially as it was published on the centenary of World War 1. All of the brothers made it back at the end of the war, some more damaged than others, but I’m from a long line of survivors.

Being able to connect to the past is important, it makes me feel part of something bigger than me. My great grandparents had 11 children, so there must hundreds of their descendants spread all over the world, as well as the ones still in Liverpool. It’s not a feeling of nostalgia for the past, so much as a connectedness through the past to the present, and even the future.

The story illustrates two things  for me. Firstly, we humans need to be part of a larger whole – whether that’s our family, our wider social network, or our wider business connections. Secondly, links to the past need to be fostered just as much as our present day connections, otherwise we’re just drifting in space and time, with no real roots.